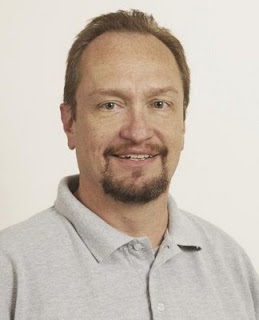 Welcome to 5 More Questions With.....

Today's Guest is Tom Morrisey. Tom did an interview with me back in June and has returned to talk about his latest book, Pirate Hunter, which is in stores now.

And now without further delay, on to the questions:

Question 1: In your previous interview on my site you mentioned that each of your novels is written to answer a spiritual or theological question. SO what is that question for Pirate Hunter?

Psalm 103:12 says, "As far as the east is from the west, so far has He removed our transgressions from us." And Will Rogers once said, "Nobody ever forgets where they buried the hatchet." So there's the rub: God, who is omniscient, willingly forgets those sins that we lay at the cross, yet we willingly add them -- ours and those of our loved ones -- to the semi-load of baggage that we are hauling through life. Laying aside grievances is an essential part of forgiveness; if we do not do that, we are in essence saying it's okay to live outside God's will, and it becomes a beam-in-our-own-eye sort of situation. And the question of this novel is, "If God is willing to forgive all transgressions, why can't you?" Or, really, "Why can't I?"

Question 2: Forgiveness seems to be the overarching theme of Pirate Hunter. Yet the ending is not neat and tidy, sort of like real life. How do you "know" where to end your novels?

My endings are often transitional moments, but that's what life is like, is it not? And I'll share a deep, dark secret; I almost always know how the novel ends before I begin writing. In fact, these day, I generally don't write a word until I have a fairly concise image of the ending. And while there are some very good "seat-of-the-pants" novelists who discover their endings as they wrote, I encourage my approach when I'm talking with budding novelists. The biggest concern publishers have when they are dealing with someone new is the novelist who can perform the takeoff, but cannot land it -- i.e., can start a novel but does not know how to finish it. To me, at least, it's easier to move rapidly when I know where I'm going. So I move toward an end that is already quite clear in my head.

Question 3: Pirate Hunter made me examine where I am at with the issue of forgiveness. Have you received any feedback regarding this theme?

Most of the mail I've received on this book has been on technique -- the back-and-forth between the contemporary story and the historical. It hasn't received anything close to the avalanche of "confessional mail" I got when IN HIGH PLACES was published. Yet all the reviews note the forgiveness theme, so obviously it is getting through, and that's good, because while I write novels to entertain, I also write them to let other Christians and seekers know that we are all carrying baggage through life. Maybe forgiveness is just a quieter subject: one that people think about, but don't feel compelled to write back on.

Question 4: The realism in your book is awesome. How much research went into this novel?

Wow. A couple of trips to the British Virgin Islands (including a visit with the leading historian there on 18th century piracy), more trips to the Keys than I can count, several trips to the Crystal Coast and Outer Banks of North Carolina (including a dive on Queen Anne's Revenge -- Blackbeard's pirate ship-- and some in-depth, one-on-one conversation with a leading Blackbeard historian), getting certified on the Dive Rite O2ptima Closed-Circuit Rebreather system, more scuba dives than I can count, lots of conversations with shipwreck preservationists, a very detailed tour of Mel Fisher's operation in Key West ... that's just sort of scratching the surface. I also did a lot of secondary research -- reading, History Channel and whatnot. But I should point out that I usually don't get up one morning, say, "I think I'll write a book on XYZ, so now I'll go spend a couple years researching it." It's the other way around. I take what I have been doing and what's fascinating me, and I craft a novel from it. And diving and shipwrecks and pirate history have always fascinated me.

Question 5: How is God speaking to you right now?

At this moment? He's telling me to act more like a Christian. And by that I don't mean the "thou shalt nots," but rather the "thou shalls." Things like feeding the hungry, sheltering the roofless, ministering to the imprisoned and loving those whom society considers unlovable. Jesus stuff. Over the last few months, for instance, I have become acquainted with a guy who is a very capable MBA with a record of service to our nation, and I've become aware that he was downsized out of his job about 9 months ago and hasn't found a new position yet because the economy stinks. So I got off my duff and started networking and got this guy some contacts. We haven't landed him a job yet, so by the definition we all learned in high-school physics, no work has been performed. But we're moving forward, he's encouraged, and that peace that surpasses all understanding has been settling around me. Which reminds me that it had been missing for a while, and that's my fault. Complacency is not of the Lord; the only reason we are not Otis-elevatored straight to heaven when we convert is so we can be the hands and feet of Christ here on earth. In Matthew, Jesus tells us that the "yoke is light." But the point is, there's still a yoke, and we're obliged to carry it.

Thanks for coming back for seconds Tom!

There you have it. I would encourage you to read any (and all) of Tom Morrisey's previous books and to pick up a copy of Pirate Hunters from your local Christian bookstore today. You can also check out all the exciting resources on Tom's website.

To see past 5 Question guests, check out the rotating interview links on the sidebar.

Is the book available in India?

You can order it for India here:

Rick -- an update... That MBA friend I told you about? He found a great job just before Christmas -- the specs read almost as if it was created just for him. And he's giving God all the glory; he knows the timing was no coincidence.

Praise God that is awesome.