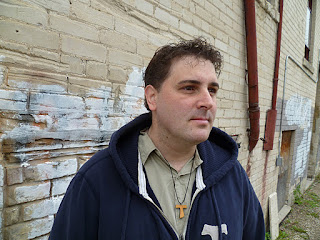 Today's Guest is Jamie Arpin-Ricci.
I first met Jamie at a YWAM leadership conference. Jamie is a writer, pastor, and missional church-planter living in the inner city of Winnipeg, Canada with his Aussie wife, Kim, and Ethiopian son, Micah. He is the pastor of Little Flowers Community, a Franciscan-Anabaptist faith community in Winnipeg's downtown West End. He is also the director of Chiara House, a new intentional Christian community who share life "on the margins".

Jamie has contributed to several books and is the author of the book,
The Cost of Community: Jesus, St. Francis & Life in the Kingdom (IVPress, Nov. 2011) & he writes at a blog by the same name at www.missional.ca. He is a third order Franciscan with The Company of Jesus, an ecumenical order under the Anglican rite.
And now without further delay, on to the questions:

1. Can you explain why you felt led to write The Cost of Community?
The book began as a series of studies/sermons that we were going through as a community. Little Flowers Community (the church I planted & pastor) is a Mennonite church in the Franciscan tradition. As odd as that sounds, both share a lot in common, not the least of which is the conviction that we should seek to live out the teachings of Jesus, especially the Sermon on the Mount. So, as a community, we felt it was important for us to explore it. We spent many, many weeks exploring the Sermon on the Mount verse by verse, considering the implications of what Jesus taught for our lives together as an expression of Christ's Body. It was a powerful and meaningful exploration. As a result, I have pages or research, stories, experiments, etc., which I had been blogging through as well. One of my friends at InterVarsity Press, Adrianna, suggested it would be a good book. And so, "The Cost of Community" was born.


2. What can you tell me about the Little Flowers Community?

My wife & I are the co-directors of Youth With A Mission Urban Ministries Winnipeg, which we planted 10 years ago. Several years ago, we opened a used bookstore in our inner city neighbourhood (where we lived and served), hoping to create a safe place to connect with our neighbours, as well as allow our neighbours to connect more with one another. It was a great success! Before long, a group of us were connecting once a week to share a meal together, sometimes drawing up to 50 people. We shifted the mid-week meal to Sunday evening, as it was the day that was most convenient for everyone. It wasn't unusual for someone to pull our a guitar to sing some songs- just as likely being a selection from the Arrogant Worms as a worship song. People shared their lives, asked for advice and even prayer. One Sunday evening, a single mom in our group approached me and said: "Jamie, I think we're a church. Will you be our pastor?" After some prayer, we partnered with Mennonite Church Manitoba and Little Flowers Community was born. We've been worshiping & sharing life together for 3 years. Little Flowers is an eclectic group of Christians who have found genuine community with one another. However, it is not just a community of friends who enjoy each others company. First, outside of the Holy Spirit, the people who come together would be unlikely to ever hang out. Second, we are united by a deep sense of God's love and mission in the world. To that end, we are often a place where people who are not as comfortable in the traditional church setting can feel at home.
3. The Sermon on the Mount seems to intimidates some believers. Why is that?

Any teaching that begins by calling the poor and persecuted blessed is like to be dismissed, diminished or explained away by many. For some, the Sermon on the Mount is intimidating because it demands absolute, selfless and sacrificial service to God. While many like the idea of such devotion, the reality is far more difficult to swallow, especially when it is likely to get you suffering or even death.

However, some people have dismissed, not because it is too demanding, but because they misunderstand it. One of the products of the Reformation is that, at times, Christians can be overly cautious about "works righteousness". In other words, so worried are they that they might be seen trying to earn their salvation that any demanding obedience to Christ becomes almost suspect. The Sermon on the Mount, not properly understood, could seem to be calling people to works righteousness- which is why many theologians suggest that Jesus never intended us to try and follow it at all.

The truth is, though, that Jesus

does call us to a radical obedience to His teachings in the Sermon on the Mount. However, it is critical that we don't see the "sermon" as Jesus's ethic or rule of life. Rather, what Jesus was preaching was Himself. The Sermon on the Mount is Jesus. He invites us into Himself, as His Body, united and empowered by the Holy Spirit- thus the righteousness is not ours to take credit for, but it is ours to incarnate. This is exciting to realize! Yet, what often scares people away is that such a place in His Body comes only when we share in His cross.

4. What can we learn from the life of St. Francis of Assisi?

Some people have called St. Francis "the last Christian", others even calling him a "second Christ". Such homage- extreme and inappropriate though it might have been at times- was born because of the amazing and powerful life that Francis led. Few Christians have had (and continue to have) such a formative impact on the Christian world. He is even widely respected in other religious tradition and among many who claim to religious beliefs at all. And yet, it is not the perceived perfection of St. Francis that makes him appealing to me. Yes, he accomplished amazing things. Yet, when you look at his life you say that, time and again, he made mistakes, took things to extremes and had to repent over and over. He was far from perfect. And it is in his real and broken humanity that his appeal is found. After all, if such an imperfect person can have such an impact for the kingdom, what excuse do I have for not embracing such a life of radical devotion? A great book to help introduce you to how Francis might be important to the church today, check out "Chasing Francis: A Pilgrim's Tale" by my friend, Ian Morgan Cron. This is a must read for those who are new to St. Francis.

5. What do you hope readers will take away from The Cost of Community?

My deepest hope for readers of "The Cost of Community" is that they will be challenged to consider what it means to follow Jesus. My hope is that it will drive them into the lives of other Christians who share this passion for obedience. I want to see communities of Christians embracing the truth that Jesus is be followed as much as worshiped.

I also hope that people will begin to see their own stories through the lens of Scripture. I want them to see that their place in God's kingdom is part of the continuity of His work through history. There is no insignificant time or role in that story- His story.

Finally, I hope they share it with their friends and family. I believe in this book, not because I have brought a new message or deserve any credit, but because it is the product of a community of believers who are genuinely seeking to follow Christ faithfully and fruitfully before a watching world.

Thanks so much Jamie!

Well there you go. Please go and pick up a copy of the Cost of Community today.

To see past 5 Questions guests see 5 questions page under the tab above.

Email ThisBlogThis!Share to TwitterShare to FacebookShare to Pinterest
Labels: 5 Questions, Arpin-Ricci, Sermon on the Mount