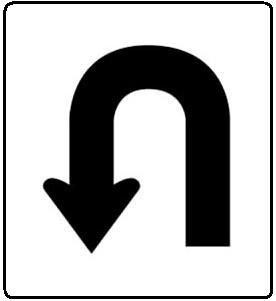 So here is a question I have been pondering lately: Am I open to a U-Turn if God wants me to go in a different direction?

I remember our time in Croatia as missionaries back in the 90's. We ended up in Croatia by "accident" or as I like to call it, "Godcidence". Originally my wife and I planned to go to Macedonia. We were absolutely convinced this was where we were to go. I had been following the disintegration of Yugoslavia for years and knew the Lord wanted me there.

So I checked into which agencies were working in Macedonia. We found one and applied to join their staff.

We finally decided to go with YWAM but the only base at the time was in Croatia. We decided to go there and "launch" into Macedonia after getting our feet wet in the Balkans. While working in Croatia, we found out a YWAM prayer team from Canada was going to be heading into Macedonia. We made tentative plans to join them.

A few months before they arrived, we had to go back to the US for a family emergency and then Sarah had a few pregnancy complications and we stayed through the birth...missing the Macedonian prayer trip.

We really felt the Lord wanted us back in Croatia because we were missing what He had for us. So we packed up everything and headed back to Croatia after the birth of our daughter. The next 17 months were amazing, exciting and inspiring. We really felt an amazing love for the country and the people that resides to this day.

Near the end of that time, we helped staff the 1st ever Croatian DTS. The students prayed and felt God was leading them to Macedonia for outreach. We were stoked and the school leader figured, as we did, that Sarah and I would lead the outreach to Macedonia. God again intervened and instead of going to Macedonia, God led us back home!

There is a story about the early life of Jesus. His earthly father, Joseph, and Mary had fled with Jesus to Egypt after His birth because Herod wanted to kill Him. The Lord told Joseph in a dream to head to Egypt so he did! After a time, Herod died and the Lord told Joseph to go back home. When heading in that direction the Lord told him to turn aside to Galilee as Herod's son had assumed power. (Matthew 2:13-22)

1. God knew who would assume power.
2. Galilee was where God needed Jesus to be in order to fulfill some prophesies (God's plans) of the OT.

I often wondered why God did not tell Joseph to just go to Galilee. However, like our family with Macedonia, maybe God needed to get him moving in obedience before revealing more of the plan.

Which leaves me wondering, if God tells me to turn aside in a new direction today...would I still be as obedient?

I pray the answer would still be Yes!
Posted by RDA at 4:41 PM

I can't speak to your situation specifically, but there is a broader lesson here, and that is that people who feel they want to do something to advance the Kingdom of God should make every effort to do so while they are young.

As our roots go deep, it becomes more difficult to be transplanted.

I agree in principle. The older we get, the harder it is to turn aside our "life" and move as the Spirit leads.