He Thinks I'm a Hero 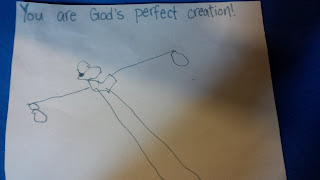 My son drew this picture last month while we were at a Salvation Army Leadership Camp down in Gibsons, BC.

He was asked to draw somebody and he told me it was a picture of me as a superhero!  Apparently I was flying and able to shoot fire out of my hands.  Now I must admit, that would be pretty cool.  I would love to be able to fly and shoot fire out of my hands.  I would settle for just flying.  I was also tickled as a Dad that my son saw me as a superhero!  I know he won't always see me this way.

When my daughter was very young she also told me I was her hero.  I want to be my kids hero but more importantly, I want my kids to look at me and see Jesus living in me and through me.  I want my life, my actions, to point my children to their Heavenly Father.

I have read that passage a lot lately.  I want my family to love God with all out heart, soul and strength.  I want to impress that on my children.  I want to share the love of God and how awesome He is.  If my kids walk with God throughout their life, then I truly will feel like a superhero!
Posted by RDA at 5:38 PM No comments:

I am always hesitant to write anything around the death penalty.  I have noticed people's passions are such that they begin to go overboard in arguing their point.  I wrote about this topic and my wrestling with it way back in 2008 http://apperson.blogspot.ca/2008/11/wrestling-with-word.html and though the comments on this blog were not too over the top...I received tons of emails about it and even had people stop talking to me for a season.  I was fairly raked over the coals.

So at first I was unsure if I wanted to review Death on Hold by Burt and Anita Folsom.

This is the story of Mitch Rutledge, a man on death row with an IQ of 84.  He admitted his crime and was sentenced to death.  He also said he was sorry for what he did. A story in time magazine about people on death row addressed the life of Rutledge and the last line of the story said, "Forget him."

The Folsoms and a few others could do no such thing.  They began a correspondance with Mitch Rutledge that has continued on for 30+ years now.  Rutledge had his sentence upheld once, then saw it later reduced to life without parole.  He still sits in prison today.

He is not the same man he once was though.  With the support of his new "family" and a faith in Christ, Mitch learned to read and write, received his GED and later took college courses.  He became a model prisoner and has appeared in videos and given lectures to groups brought to the prison about the dangers of poor choices.

Mitch had a hard life before his crime but owns the fact that he also made por choices.  The take away from this book is that ALL lives matter, even a teenage murderer with an IQ of 84!  This is the story of how God can redeem ANY life.  It doesn't matter if you are for or against the death penalty, you should read this book and see how God can transform lives.

I received this book free from the publisher through the BookLook Bloggers http://booklookbloggers.com; book review bloggers program. I was not required to write a positive review.
Posted by RDA at 6:27 PM No comments:

I am not a huge fan of parenting books.  It is not that I am a perfect parent, far from it.  However, the ones I have read always seemed a bit unrealistic.  It got to the point where I avoided said books any way I could.  Then I got an email offering this book.  I was intrigued...I sid Yes.

Raising Boys by Design by Gregory Jantz and Michael Gurian was not what I expected.  The first part of the book spent a bit of time looking at how mens/womens brains worked.  As I read what could have been a very dry section, I found myself very, very interested.  The authors drew me in with their explanations.  I started reading parts out loud to my wife.  My daughter picked it up when I left it in the car and started reding it.  She said it was very interesting. I learned things not only about my kids, but about myself as well.  I started sharing parts of this section with others.

I guess you could say I liked it.

The second part of the book was a practical application of all that was discussed in the first part.  Using the acrynom HERO, the authors provide a vision for parenting your son.

As they look at areas like character, sex, technology and other areas, the authors build a case for raising your son to be a hero.

I have to give this book 2 thumbs up.  Why not pick up a copy today.


This book was provided for an honest book revciew by graf-martin and Waterbrook Press.
Posted by RDA at 3:55 PM No comments: